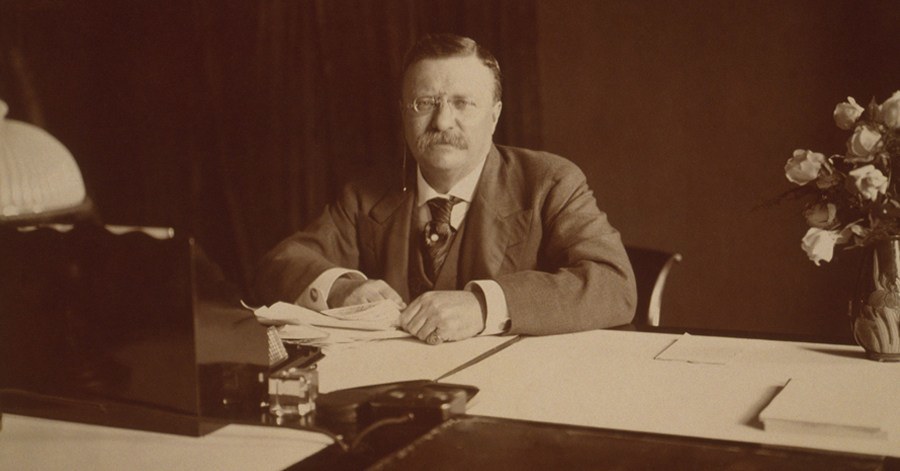 In April 1915, former president Theodore Roosevelt penned a piece for Ladies Home Journal titled “The Books That I Read and When and How I Do My Reading.” In it, he notes that “it would be impossible to try to enumerate all the books I read, or even all the kinds”—which is understandable, considering he typically read around a book a day and was often reading several books at a time.

Still, Roosevelt recommends plenty of books in the piece, name drops a few titles he’s not so crazy about, and doles out tons of reading tips in the process.

“Fathers and mothers who are wise,” Roosevelt wrote, “can train their children first to practice, and soon to like, the sustained mental application necessary to enjoy good books.”

2. DON’T FORCE YOURSELF TO READ WHAT YOU DON’T LIKE

“The reader’s personal and individual taste must be the guiding factor” when choosing a book, Roosevelt wrote. “I like hunting books and books of exploration and adventure. I do not ask anyone else to like them.”

And of course, as Roosevelt noted in his autobiography, a reader “must not hypocritically pretend to like what he does not like.”

3. TAKE BOOK RECOMMENDATIONS WITH A GRAIN OF SALT

You’re the best person to choose what books you want to read. “If a man or woman is fond of books, he or she will naturally seek the books that the mind and soul demand,” Roosevelt wrote. “Suggestions of a possibly helpful character can be made by outsiders, but only suggestions; and they will probably be helpful about in proportion to the outsider’s knowledge of the mind and soul of the person to be helped.”

4. TRAIN YOURSELF TO ENJOY THE CLASSICS

Roosevelt has a lot to say about personal preference when it comes to books, and how that should dictate what someone reads. However, he also has opinions about reading classics versus reading … the trashy stuff. “If anyone finds that he never reads serious literature, if all his reading is frothy and trashy, he would do well to try to train himself to like books that the general agreement of cultivated and sound-thinking persons has placed among the classics,” he wrote.

Roosevelt wrote in his autobiography that “books are almost as individual as friends. There is no earthly use in laying down general laws about them. Some meet the needs of one person, and some of another.”

Still, in “How I Do My Reading,” he wrote that personal preference isn’t an excuse for “permitting oneself to like what is vicious or even simply worthless.” What he means by that, we can ascertain from what follows, are books that deal with sex—which makes sense, given that Roosevelt was quite proper (some might have called him a prude).

6. DON’T BE AFRAID TO FOLLOW A TOPIC THAT INTERESTS YOU

Roosevelt wrote that he reads in “streaks,” where he gets interested in a particular subject and reads about it in book after book after book, “and probably also [reads] books on subjects suggested by it … Even in pure literature, having nothing to do with history, philosophy, sociology or economy, one book will often suggest another, so that one finds one has unconsciously followed a regular course of reading.”

You may think that you’re too busy to read, but Theodore Roosevelt would disagree—he always found time to fit in a book (or four) every day. He wrote that he could “almost always” read in the evenings, and if he was otherwise occupied, he’d schedule half an hour of reading before bed. But he never limited himself to just the evening for reading. “All kinds of odd moments turn up during even a busy day, in which it is possible to enjoy a book,” he wrote. “And then there are rainy afternoons in the country in autumn, and stormy days in winter, when one’s work outdoors is finished and after wet clothes have been changed for dry, the rocking chair in front of the open wood fire simply demands an accompanying book.”

Theodore Roosevelt, who traveled quite frequently, knew the value of bringing a good book along on vacation. “Railway and steamboat journeys were, of course, predestined through the ages as aids to the enjoyment of reading,” he wrote

“In such cases the literature should be reasonably heavy, in order that it may last,” he wrote. Being “under these conditions” allows the reader to tackle more ambitious books and authors, “as you never would if surrounded by less formidable authors in your own library; and when you do reach the journey’s end you grasp with eager appetite at old magazines, or at the lightest of literature.”

9. USE READING AS A RESPITE FROM THE REAL WORLD

Roosevelt notes that the “best critics scorn the demand among novel readers for ‘the happy ending,’” but he personally didn’t see anything wrong with happy endings in novels, especially because real life is tough enough. “There are enough horror and grimness and sordid squalor in real life with which an active man has to grapple; and when I turn to the world of literature … I do not care to study suffering unless for some sufficient purpose. It is only a very exceptional novel which I will read if He does not marry Her; and even in exceptional novels I much prefer this consummation. I am not defending my attitude. I am merely stating it.”

10. LET YOUR MOOD DICTATE WHAT YOU READ

Roosevelt was widely read, devouring books on everything from history and the military to volumes of poetry and natural history. “A man with a real fondness for books of various kinds will find that his varying moods determine which of these books he at the moment needs.”

11. FOCUS ON READING OF “PERMANENT VALUE"

If there’s one thing you’ll learn from reading “How I Read,” it’s that TR seems to prefer classics to brand-new books. “Another matter which within certain rather wide limits each reader must settle for himself is the dividing line between (1) not knowing anything about current books and (2) swamping one’s soul in the sea of vapidity which overwhelms him who reads only ‘the last new books,’” he wrote, adding that the headline “books of the week” is damning both for the books and the reviewer:

Roosevelt, whose own library at Sagamore Hill spanned multiple rooms (an accounting of all of the family’s books from 1919 was 77 pages long, was no fan of “best books” lists and what he called a “5-foot library.” (He’s referring to Harvard’s “5-foot shelf,” a compilation of 51 works of literature. According to Project Gutenberg, “Dr. Eliot, then president of Harvard University, had stated in speeches that the elements of a liberal education could be obtained by spending 15 minutes a day reading from a collection of books that could fit on a 5-foot shelf.”) “There remain enormous masses of books, of which no one man can read more than a limited number, and among which each reader should choose those which meet his own particular needs,” TR wrote. “There is no such thing as a list of ‘the 100 best books’ or the ‘best 5-foot library.’ … To attempt to create such a library that shall be of universal value is foreordained to futility.”

13. READ HISTORICAL WORKS TO FEEL BETTER ABOUT THE PRESENT

Roosevelt wrote that books can provide “consolation of a non-literary kind.” He advised that those who are irritated or frustrated or depressed about the current state of affairs might find reading books that deal with history “illuminating” or “consoling.” In some cases, “he will be …. devoutly thankful that his lot has been cast in the present age, in spite of all its faults.”

Readers are encouraged to click here to read the article in its entirety.
BY ERIN MCCARTHY, OCTOBER 25, 2019